What is BattleGroup42 about?

BattleGroup42 (aka BG42) is a modification for Battlefield 1942. Historically accurate equipment displays the benefits and failings of their real counterparts. Features such as multirole APCs and improved infantry classes promote teamplay by making it easier and more beneficial for players to work together. A comprehensively revised damage system allows for a much greater depth of feel without being draconian, one shot kills are the exception not the rule.

We have gone to great lengths to produce gameplay that is both balanced and enjoyable. Attention to detail has also become a key aspect of the mod with high quality textures, sounds and models all carefully researched and developed. The result is a mod with...

Many of the maps are made by our developers. These have been increased with each release and now represent 12 nations: Australia, Canada, China, Germany, Greece, Hungary, Italy, Japan, Netherlands, Soviet Union, Vichy France, United Kingdom, the United States and Yugoslavia.

What are the system requirements?

Do not try to play online with a connection speed lower than DSL/Cable.

How do I install the mod?

You can consult our installation guide.

XYZ has no texture or looks grey

There is a problem with the texture.rfa file that you have installed.

Try delete the BattleGroup42 directory and re-install with all installation files. By default the directory is at C:/Program Files/EA Games/Battlefield 1942/mods/bg42

If that doesn't work, delete the directory again and re-install all installation files from another site or mirror. Re-install the mod and try again.

BattleGroup42 does not work on Vista!

Are there any servers?

There is a BG42 online gaming event at the [MOB] Server every Wednesday and Sunday at 8.00 pm GMT+1

You are all welcome to join!

For more servers you can check out Game-Monitor for a list.

Does BattleGroup42 host a Teamspeak server?

How do I use the towed anti-tank guns?

On some maps you may see anti-tank guns already attached to trucks or APCs of some kind. These towed anti-tank guns can be deployed anywhere on the map, making them powerful weapons for setting up extra defenses or even an ambush.

How do I use the gatehouses to open gates? 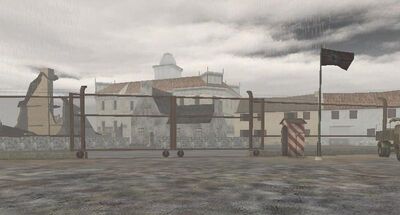 For normal gates, go inside the gatehouse (press Enter key) and use the “A” and “D” keys to open or close the gate.

For boom barriers (i.e. the poles), go inside the gatehouse and use the arrow keys to operate.

How to use dual purpose guns? 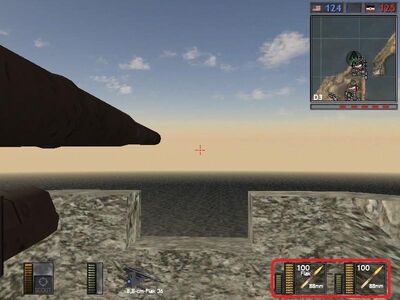 Some vehicles have been given the artillery spotting ability. This is usually given to light vehicles such as Daimler Mk II, BA-64 and the Sdkfz 231. Look for the binocular icon in the lower right corner.

Why do some vehicles work differently in Conquest and Co-op modes?

Bots in BG42 are smarter than their counterparts in vanilla BF. They have nice aiming skills and great bravery, but, to be honest, they are still not very clever, unable to think in 3 dimensions. This means, bots can handle some vehicles not in the same manner than humans. On the other hand, multiplayer gaming in conquest or objective mode is maybe less fun, if one has to switch positions in a vehicle in order to use it properly. This is why we developed different variants of some vehicles. For example, in conquest, the driver of a self-propelled artillery will also control the gun. In Co-op or Single Player games, the gun controls are separated from the driver to allow the bots proper aiming. Other examples for special coop variants are all submarines and some ships.

How do I use the catapult plane on the Furutaka or Salt Lake City?

You must first enter the catapult station and turn the catapult to one side with the mouse. Then get out and use the plane just like other planes launched from ships. Consult this video for details.

You probably are at a control point that needs more than one soldier to be captured. These control points have flagpoles which indicate how much of comrades will be needed to make it switch. 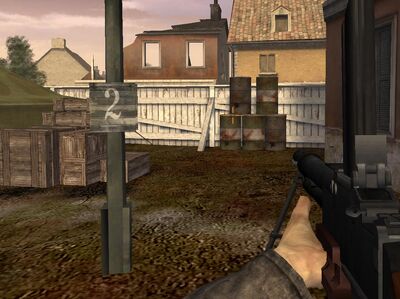 What does "push map" mean?

Why is there no XYZ in your mod?

The BG42 development team is a very small team, and we often lack the manpower and time to make new stuff, therefore they may come low in the priority or may take time to make them. In fact there are a lot of vehicles and statics under development right now, but we are not ready to announce them until they are finished!

New armies require the right uniforms, vehicles, weapons, voices etc. And we have not the manpower to fulfill all that requirements which are needed to implement a new faction. We already have new armies which have to be finished first before starting with a new one.

However, we are glad if players give us feedback and make suggestions to improve BG42 or even contribute with self made stuff like textures or models! Your comments and work are what helps BG42 getting better!

I've faced a Sherman tank that took a lot of shots and it still won't get destroyed!

You have probably faced a Sherman Jumbo, a variant of Sherman tank which has much thicker armor than other common ones.

The Jumbo was also mistaken by German gunners in reality, and that was the plan. They were mainly used as column leaders to draw enemy fire on them. They have a much greater chance of survival (only a handful were lost in WW2), giving the rest of the column the opportunity to respond the attack effectively or to withdraw.

The damage system does not seem realistic.

We have a damage system which has been evaluated and used successfully for many years. This system accurately represents the armor and projectile strength of the real vehicles our models represent. The damage system settings, especially in regards to projectiles and armor, are based on careful research. Sometimes people think our heavy German tanks are too vulnerable against enemy fire, but this is often due to online gaming experiences. We cut the penetration capabilities of each gun to one third of its original value. This has been done to simulate damage sustained by real tanks, from shells that didn't destroy the tank but disabled tracks, or jammed turret mechanisms, as well as other types of non-lethal damage that cannot be simulated with the BF1942 engine. Instead we decided to have our tanks receive overall damage with every hit.

When a vehicle has depleted its health points, it will not be destroyed immediately but will become disabled and burn for a short period of time. This was done intentionally because we want to give crew members at least a limited chance to bail out - which is realistic in all terms.

How the damage system works?

So how the damage that is inflicted by a projectile will be calculated? In reality, a projectile that penetrates the armor, in most cases will put the tank out of action, killing crew members, doing serious damage to internal systems or setting the ammunition on fire. But that would mean, that almost every hit in the game would be a one-shot-kill - and gaming fun would suffer greatly from this. The Battlegroup makers have therefore came up with a model that reflects the real fighting strength of the vehicles, without allowing too many one-shot kills.

For this, the real penetrating power of a tank or anti-tank gun is divided by three. A gun with a impact performance of 150mm (for example, 8.8 of the German Tiger tank) is set in the game to a virtual level of 50 mm. If such a projectile, for example, hits the virtual 120mm front armor of a Soviet IS-2 tank, the corresponding damage done is 42% of the IS-2 health. This is calculated as following: Penetrating power divided by three, the result divided by the armored strength. This results in a value that is multiplied by 100 and indicates the damage percentages. So at 100% health an IS-2 would be destroyed after the third hit. All BG42 vehicles have 100 hit points at 100% health.

The situation is different in light armor. The M3 Stuart for example has only a frontal armor of 40mm. It is therefore lower than even the in-game penetrating power of the Tiger. A one-shot kill will be the consequence (damage effect = 100%). To give the occupants of the tank a minimum opportunity to escape from the destruction of the tank, the maximum damage effect per hit, however, was limited to 95% health (this does not apply to soft skinned vehicles like jeeps and trucks). At this value the tanks will catch fire and explode after a few seconds even. This effect is also applied at mines in BG42.

There is one limitation of the "Rule of Thirds", which applies if the real penetration capacity of a gun is smaller than the thickness of the armor it hits. For example, given a gun with a real penetrating power of 60mm, that fires at an armor plate of equal strength, the damage of the BG42 Mod is 20mm in accordance with the rule of thirds, making 33% damage. But if it hits an armor, which is thicker than the real penetrating power, the damage effect is cut in the game by half, in this case, to 10mm. So you will need twice as many hits to destroy the enemy tank. Example: If a cannon with a real penetration capacity of 60 mm hits an armor plate of 75mm thickness, this will result in a damage effect of 13,3%. One should therefore think very carefully about if and which part of an enemy tank can be attacked with success.

There are also examples, in which projectiles cause no damage at all. For machine gun projectiles on tanks this is obvious. But, for example, if a 37mm gun of a M3 Stuart (penetration performance 50mm) hits the turret front of the King Tiger (thickness 185mm) it will also cause no harm. That is because in this case even the original penetrating power of the gun is less than a third of the armored strength.

You don´t have to be a tank enthusiast to be able to estimate your chances in tank-to-tank combat in BG42, but of course it helps. A slight hint will be given by the vehicle symbols on the mini-map, which indicate heavy tanks by a bigger symbol. There is also the golden rule, that the armor of a tank is most on the front, weaker at the sides, even weaker at the tail and least on the upper and lower sides. Don´t engage a heavy tank with a light tank face to face. This will be ended pretty quickly in a smoking wreck.

I want to join the group.

Sure! As always, we are looking for new team members to support our future plans*. We are especially looking for programmers, modelers, skinners and unwrappers. Programmers with knowledge in C++ and C# for future projects are also welcome.

Community content is available under CC-BY-SA unless otherwise noted.
Advertisement